In this article, we'll tell you about the Pricing and Paywall experiments feature update, improved Renewals Revenue Segmentation, and New calculation type in ARPPU. Curious to find out more? Here we go!

Meet the long-awaited feature – we’ve got a lot of requests to add this option and, voilà, it’s finally rolled out!

While testing pricing, you usually think about different experimentation variants. So, it is a great idea to validate more ideas faster by testing up to 5 paywalls and pricing variations simultaneously!

Note that the traffic is distributed between the variations in equal proportions by default, but you can change it anytime.

As practice shows, the more variants you have in your running experiment, the more users will be required to see a significant result. 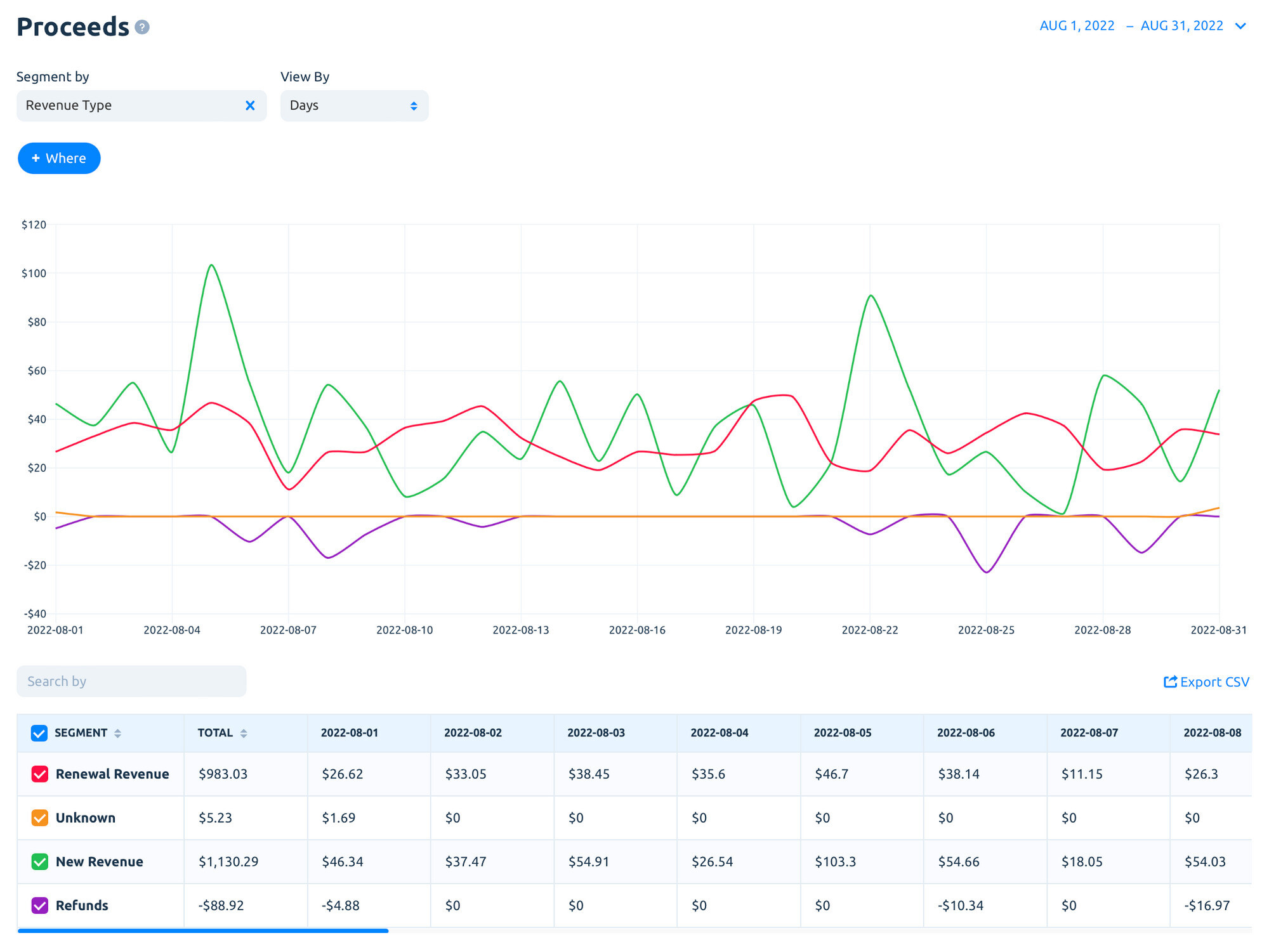 It’s really important not only to know your overall revenue for some period but to understand what it consists of. Moreover, it's crucial to understand, how much money is brought by new purchases/subscriptions and what is the tail from existing subscription renewals.

So, we’ve added the new 'Revenue Type' segment to the revenue charts. 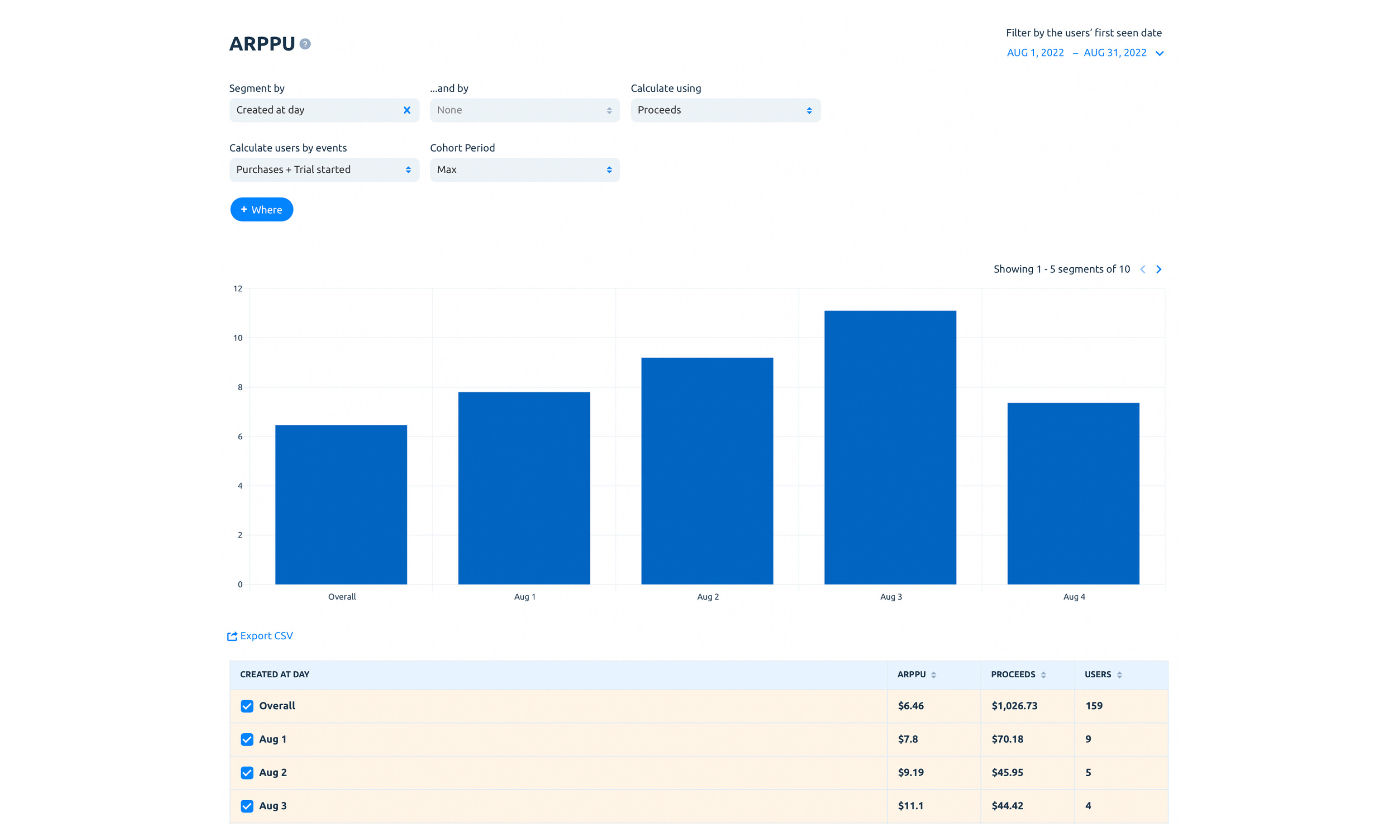 All we know is that acquiring new users is a hard job. Especially after iOS 14.5 release, as we live in the post-IDFA era.

Since it’s impossible to learn ad campaigns on events that tend to happen after the SKAN-attribution window (such as trial conversion event). Keeping this in mind, Trial started events become more useful because they usually occur minutes after the app’s first launch and can be considered a valuable user action. You can optimize the user acquisition efforts for the trial starters.

In this case, the so-called ARPAS (average revenue per activated subscriber) comes to the scene.

ARPAS is way more helpful in an ad campaign’s bid optimization as it counts only users, who performed the valuable (in terms of monetization) actions within the SKAN-attribution time frame.

To find ARPAS in the Apphud Charts, go to the ARPPU chart and select Calculate users by events - Purchases + Trial started.

If you haven’t read our latest research yet, we recommend doing it now. In this research, we share how Apphud achieved 99.9% accuracy on app revenue tracking. We proved our leadership position by data comparison with App Store Connect, Google Play, and other app revenue tracking platforms. Check the research and get the most accurate insights with Apphud!

As the world’s #1 in App revenue tracking accuracy, we want to share our tracking engine with external users. That is why we are excited to announce the Revenue API.

Revenue API – is an API made especially for enterprise games and apps, which lets you retrieve accurate proceeds value with all the fees and taxes deducted, and using Apple’s/ Google’s currency exchange rates. API will use the same core backend but on the dedicated server. It works SDK-less and will be available for use within the app, or Server-to-Server.

Revenue API is designed for enterprises with high loads and may be useful not only for games or apps but even for other SaaS services. We will release the API later this fall. Contact us for more details.

Until recently, the limit of data accuracy compared to Apple and Google revenue charts seemed to be around 85-95% among all competing services. However, the Apphud team was able to raise the bar to the next level.
9 min read
Ren

In this article, we'll explain why Apphud Promotionals are a great alternative to a free trial. And not to sound baseless, we'll tell you how our client 'forYou' app improved its marketing strategy with our service.
4 min read
Nataly

Until recently, the limit of data accuracy compared to Apple and Google revenue charts seemed to be around 85-95% among all competing services. However, the Apphud team was able to raise the bar to the next level.
9 min read
Ren